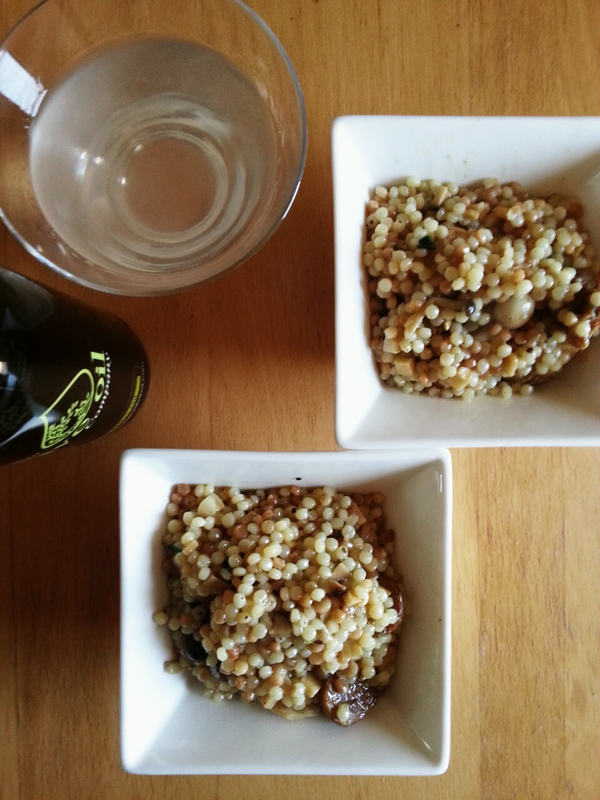 I bought about 5-6 cups of Israeli couscous on a whim the other day and wasn’t exactly sure what I wanted to do with it. I’ve been on a mushroom kick, recently, which is all well and good, but I just couldn’t decide how I wanted to put the two together. I decided to balance the mushrooms and some spicy sausage (which is, of course, optional) against the sweetness of Lillet, honey, and green onions. The olive oil I used was from the Rocky Mountain Olive Oil Company, and was infused with cilantro and roasted onions, but any good olive oil would be perfectly fine.

A note about cutting the mushrooms: it’s really fun to play with texture with foods, so I’ve been having fun playing around with things of the same genearal size and shape but of different textures. The mixture of mushrooms that I used included two kinds of slender, small mushrooms that I tossed in whole, but two kinds of larger, beefier mushrooms. These I chopped up to be about the same size as the finished couscous, and they wound up coming out a similar color. This lead to what looked like a homogeneous mixture, but the mushrooms were a little chewy, whereas the couscous was tender and just past al dente, leading to a more varied mouth-feel. I know that these mixed packs aren’t too common though, so if you wind up with just one time (I’d suggest crimini, oyster, or baby portabella), I’d choose just one way to cut them, and some will be better simply halved or sliced.