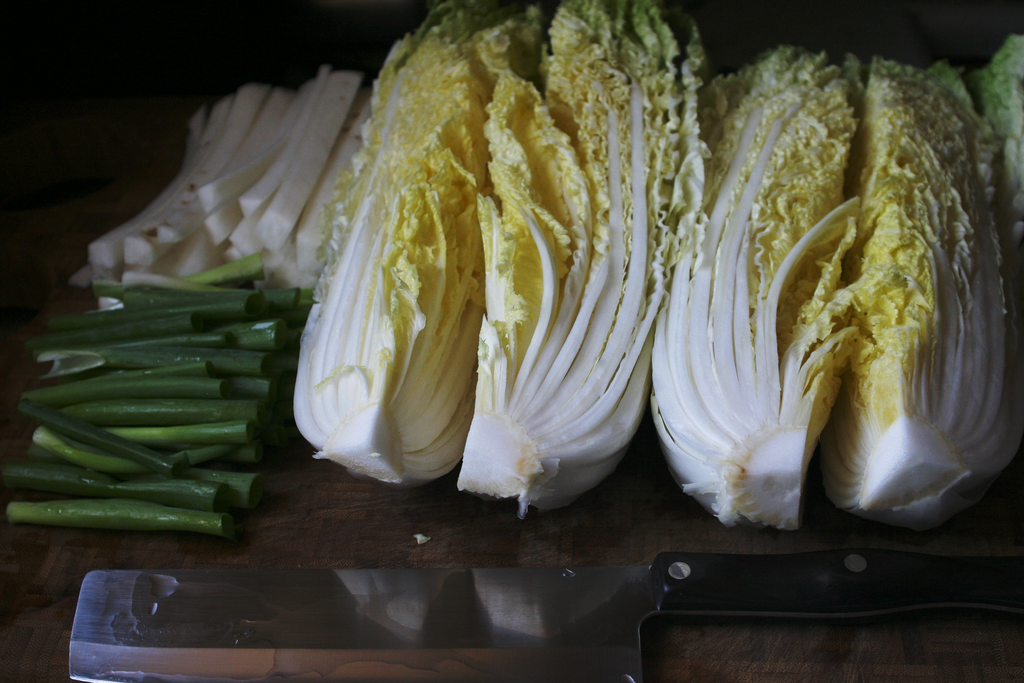 I’ve been hooked on kimchi ever since I visited Korea in 2005 (well, a touch beforehand, since I spent the weeks before researching food - always a fun time). I found a place in town to buy jugs of kimchi, which is certainly delicious, but once I found out how easy it was to make, I’ve made it regularly ever since. After a bad experience with some spoiled fish sauce, I’ve also been making it vegan, which is the recipe I’ll post here. There are a ton of different kinds of kimchi, but this is a recipe for kimjang kimchi, or Winter kimchi; a spicy cabbage and onion based kimchi traditionally made in November or December.

Kimchi is great on its own when it’s still younger, served alongside food. As it gets more sour over time, it goes great in soups such as kimchi jjigae (spicy kimchi soup) and cooked in dishes such as kimchijeon, a type of savory pancake featuring kimchi. We tend to use the ripe kimchi to make kimchi fried rice: heat some vegetable oil in a pan, add about two cups of rice and about a half teaspoon of dried soup stock such as Japanese dashi or Korean dashida, or even half of a packet of ramen seasoning. Stir 1⁄2-1 cup of kimchi, and an equal amount of the juice from the jar and cook for an additional five minutes or so. Before serving, create a well in the middle of the pan and scramble an egg in there, slowly incorporating it into the fried rice.