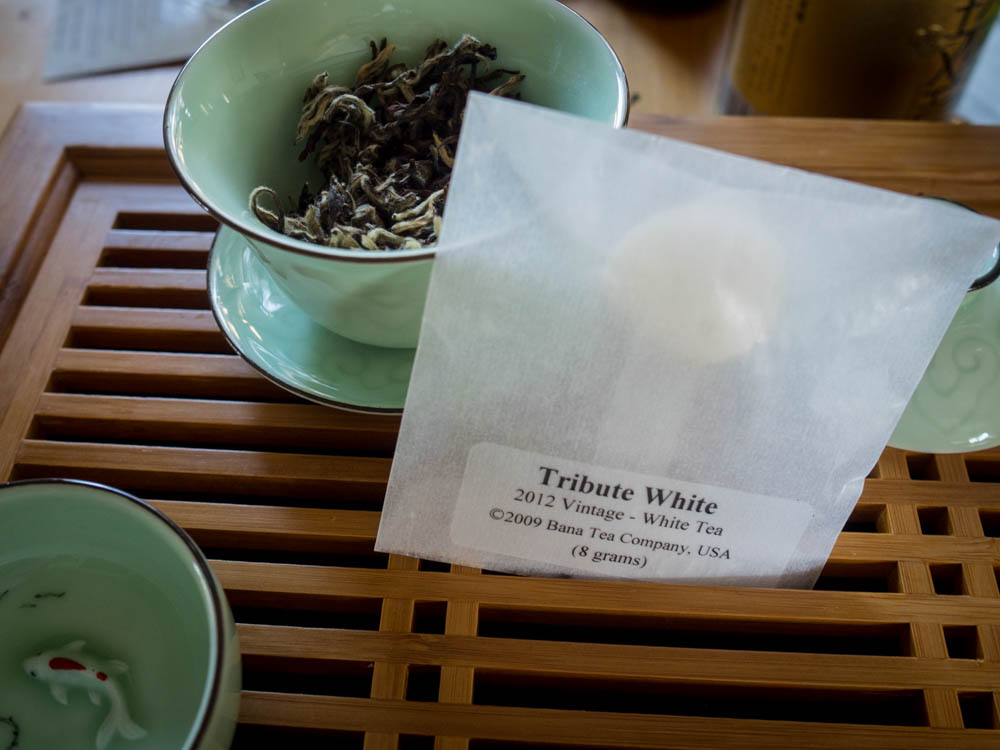 “This […] is listed by Bana as a raw pu-erh,” writes Lion on Steepster, “but if you were to just walk up to this sitting on a counter unlabeled, you might easily mistake it for a white tea.” White tea is right - both of these teas look decidedly like silver-needle style white teas, though they are apparently prepared in much the same way as many raw pu’er teas. I’m new to all of this, though, so I can’t speak to the details.

I found these teas through Bana Tea Company, the shop where I got those lovely Da Hong Pao oolong blocks. Before I placed my order for those, I investigated the company on Steepster to see if I might get some of their other teas as well, looking for some of the highest rated. I wound up with a few boxes of the Moonlight White sheng, intending for it to be a daily drinker, as well as a sample of the Tribute White sheng. I figured I’d review them both at once, despite tasting them several days apart, and give my impression of white raw pu’er teas. 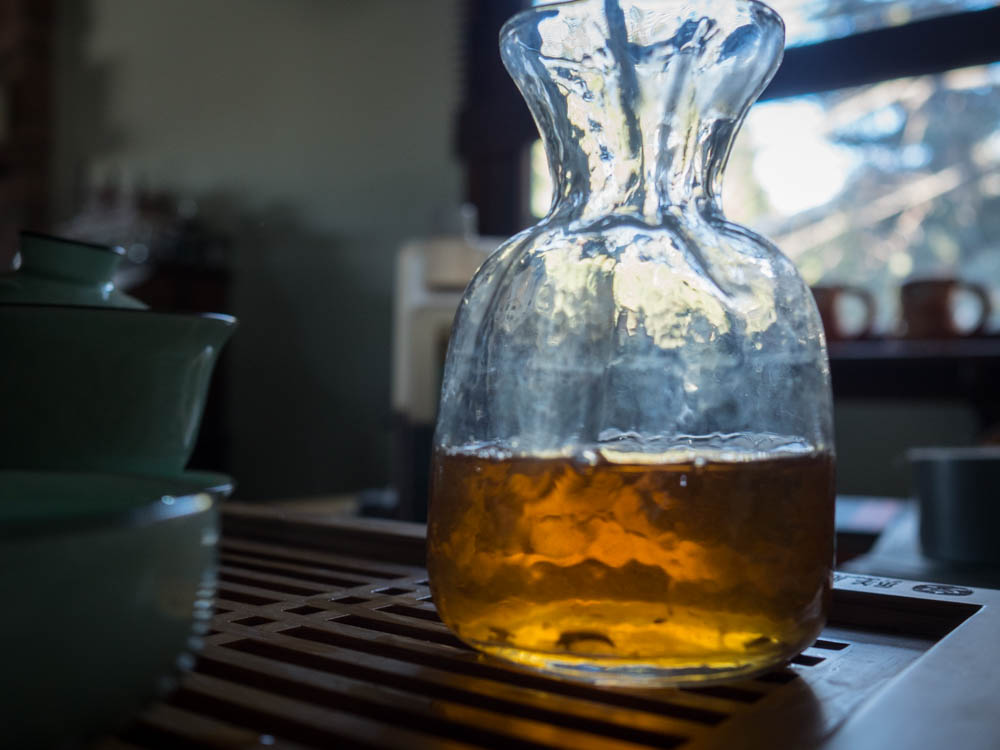 When my order of the oolong and the Moonlight White came in, I was surprised with two small samples, one of which was this Tribute White aged tea. Since I only received about 8g, I dumped the whole packet into my 120ml gaiwan and gave it a quick ten second rinse. The lid of the gaiwan had a few savory and herbal notes, moving into malty territory with a touch of cinnamon, almost horchata-y towards the end, making me wonder if I had read the wrong reviews - more on this later though.

The first two steepings (ten and fifteen seconds) were very light, and had a slight vegetal note that was covered up quickly by lots of honey, malt, cinnamon milk, and a taste that shot me straight back to childhood: hot Grape Nuts cereal with honey on it. It was a dead ringer for that, and I was knocked off my feet by the resemblance.

As the steepings went by into three and four (twenty and thirty seconds), that Grape Nut flavor shifted into more of an autumn leaf note, though the honey didn’t disappear. The sweetness continued unabated, though it got a little darker, closer to buckwheat honey.

With the middle steepings, I started to bump the time up as my water cooled down (I use a vacuum-walled thermos to hold my water at temperature, but if it’s too hot, I leave the lid off and let it cool). The dried leaves note shifted from autumn leaves to green tea, while the flavor started to pick up just a touch of bitterness, which was very pleasant.

By the sixth steeping, the tea had started to lighten up, and was a very pleasant honey and herbal blend that coated the mouth. I realized, as I was getting into this, that the effects on the body were definitely hitting me. I was getting quite tea-drunk.

Okay, so very tea drunk. I shifted from my usual style of note taking to a big scrawl that covered each of the lines that I was writing on. Steeps seven and eight (two and three minutes) simply have the words “HONEY AND MILK EVERYWHERE” taking up the whole of the notes. The tea was getting lighter, though, and the ninth steep, at five minutes, started to bring out some toastiness. 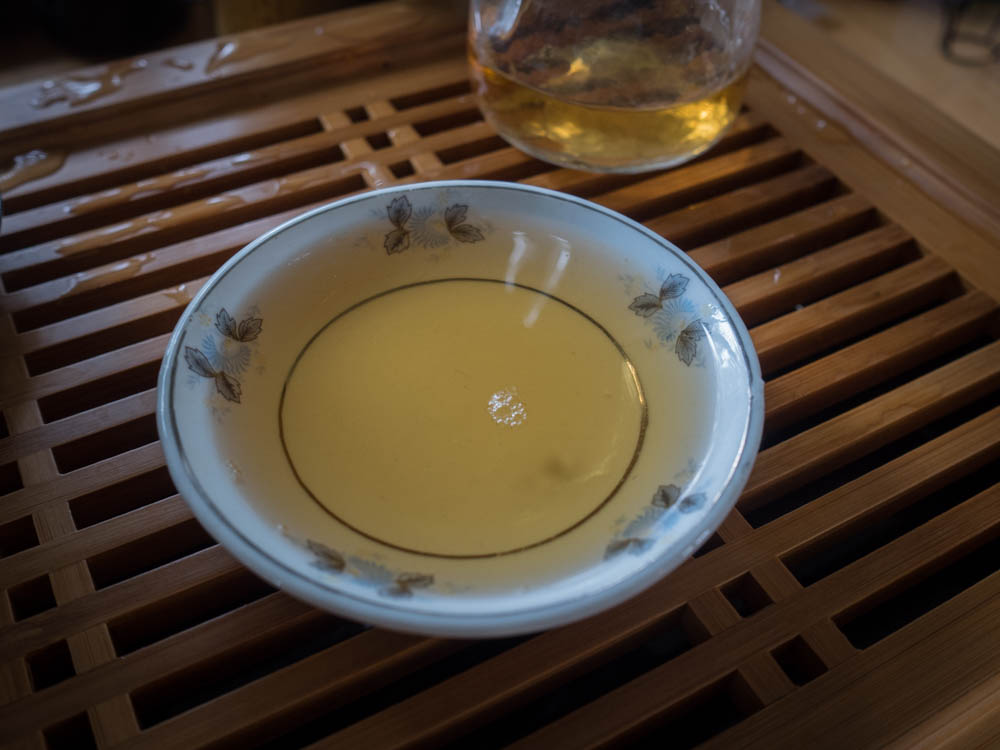 I was, I admit, quite confused by this tea. A lot of the reviews mentioned the honey-like sweetness, the creaminess, the cinnamon and references to horchata, all things that certainly apply to the Tribute White. After opening this tea, though, I was greeted by a blast of cranberries, gooseberries, or underripe grapes! It was a very intense tea, and the first steeping done right after I opened it confirmed all of this, with lots of notes of berry salad, a little tarragon, and lactic sourness, leading me to think more of a berry yogurt than anything resembling horchata.

After moving this tea to a crock for storage and giving it a bit of time to relax, though, some of this calmed down. These tasting notes are from that latter session, after the tea had a chance to relax. 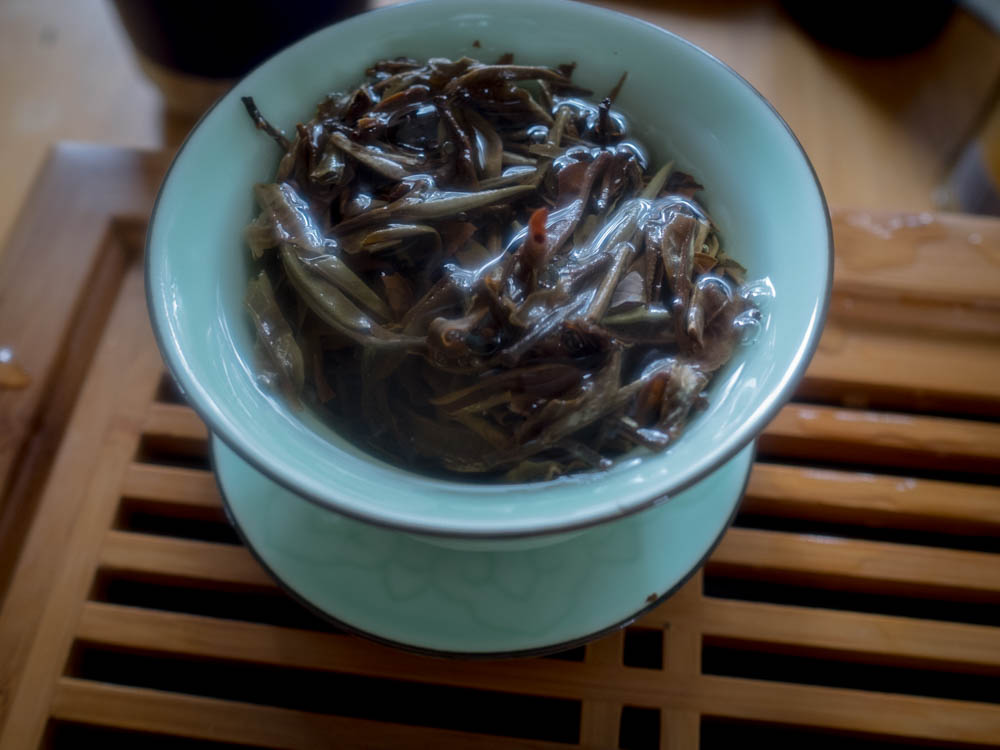 I measured out 6g for my 120ml gaiwan and used 195°F water to give just a flash rinse and wake up the leaves. The lid of the gaiwan smelled of cranberry and tamarind candy, a delightful scent from when I was growing up.

The first two reviews were a little closer to what I read about the tea on Steepster: there was some milky and honey flavors, with a touch of cinnamon. Not spicy cinnamon, though, more like the milk you get when you eat Cinnamon Toast Crunch, if that makes sense.

The sourness started to creep in around the second steep, but there wasn’t much in the way of fruit notes. Letting the tea sit seems to have given it more of that milky quality from the Tribute White, but without the punch of honey.

The third and fourth steepings were my favorite. The tea was very calm, with a little sweetness and a vague touch of bitterness. The mouthfeel was very full, and there was a bit of a dried autumn leaf note that was quite pleasant.

The fourth steeping had more sweetness with some hints of nectar, but also more pleasant astringency. It wasn’t bracing like a dry red wine or anything, just a pleasant dryness around the insides of the cheeks and the sides of the tongue, and a little pinch at the back of the throat.

The tea pooped out over the last three steeps. The dried leaf notes picked up and there was a smell of honey, though not much on the palate. After time, it settled into more of what I think of from a white tea, with a bit of astringency riding on top of a very gentle, very light flavor. I feel I could’ve pushed this tea a little harder in the end with longer steeps and hotter water to get more out of it, but by the seventh, I was done.

Will I keep this as a daily drinker? I’m not sure. I’d like to see how it ages, and how it acts with higher humidity, now that I’ve got my tea cupboard all set up. In the end, I feel a little let down – I love cranberries, don’t get me wrong, but I love horchata even more! 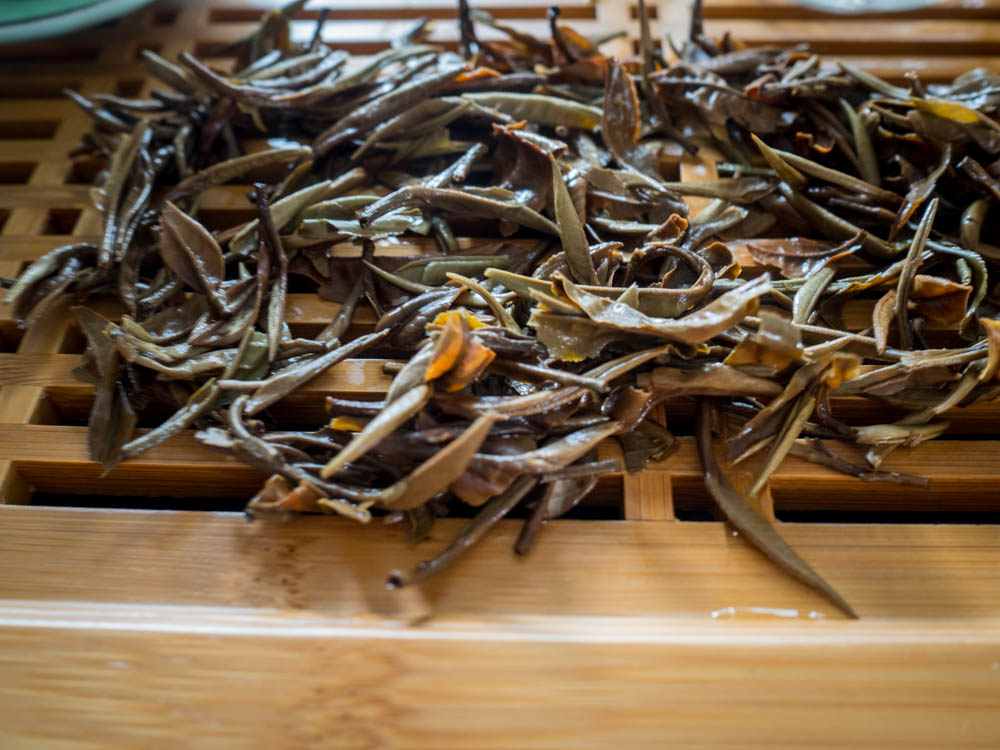