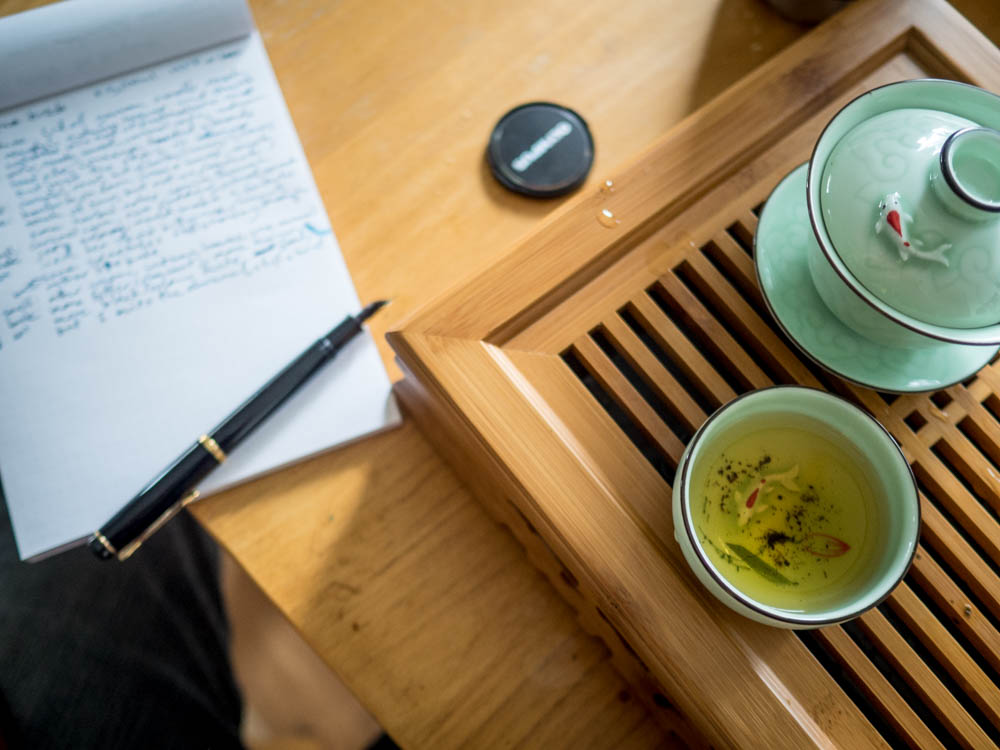 I started taking tasting notes because I wanted to be more cognizant, more present with the things that I put into my body. I wanted to think about what flavors were there, what made me enjoy - or not - the things that I ate or drank. The inspiration for this idea came from the thought and care that I saw others put into their tastings and ratings of various things.

My first encounter with it was probably the Absinthe Online forums. I’d seen ratings here and there before (I remember researching Stolichnaya vodka with my friend Aisling in college and deciding on that because it had ‘notes of marshmallow’), but the ratings on Absinthe Online, as with Steepster, RateBeer, and other sites that I wound up frequenting, were far more organized, shared far more language in common. It was something I wanted to be able to do, as well.

It took a few wine tastings at Wilbur’s, the local shop, to really internalize the fact that there was nothing stopping me. I could taste things just fine. I could approach things with the beginner’s mind, or Shosin. To crib further from TwoDog’s post, there’s a wonderful quote at the top of the entry: 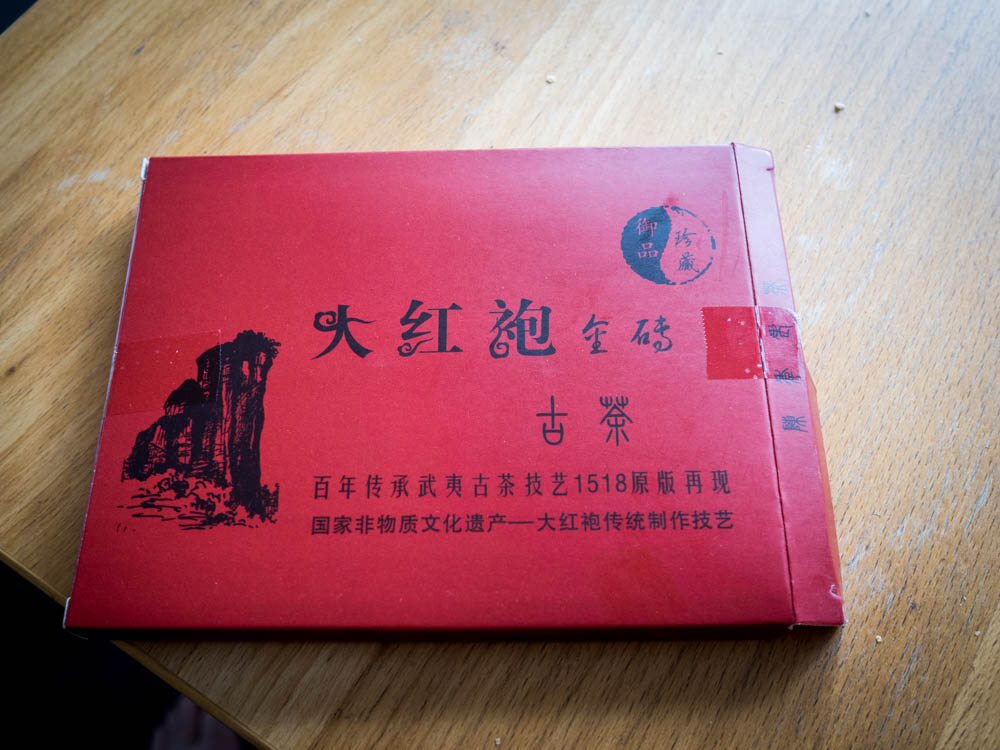 When I started buying tea with some seriousness, I was looking mostly at pu’er cakes - not exactly the most portable of teas. I work from home for a company that has me traveling around the US and Europe several times a year, and taking a cake of pu’er somewhere with the pick and all the accoutrements seemed like an iffy gamble. And besides, when on these “sprints” (as we call them), I don’t often find myself in a position to really sit down and enjoy something with the thoroughness that I might during a session.

I wound up grabbing some loose pu’er that I’ll likely review at a later date, but I don’t just like pu’er! I was intrigued also by these pressed blocks of Da Hong Pao, a Wiyu rock oolong, from Bana Tea Company. Eminently portable, as the block can be broken into smaller chunks with your fingers, and low on mess, which is something I struggle with loose tea even at the best of times, never mind on a sprint.

So it is that I’m tasting something fairly new to me, with my beginner’s mind, and seeing where it takes me. 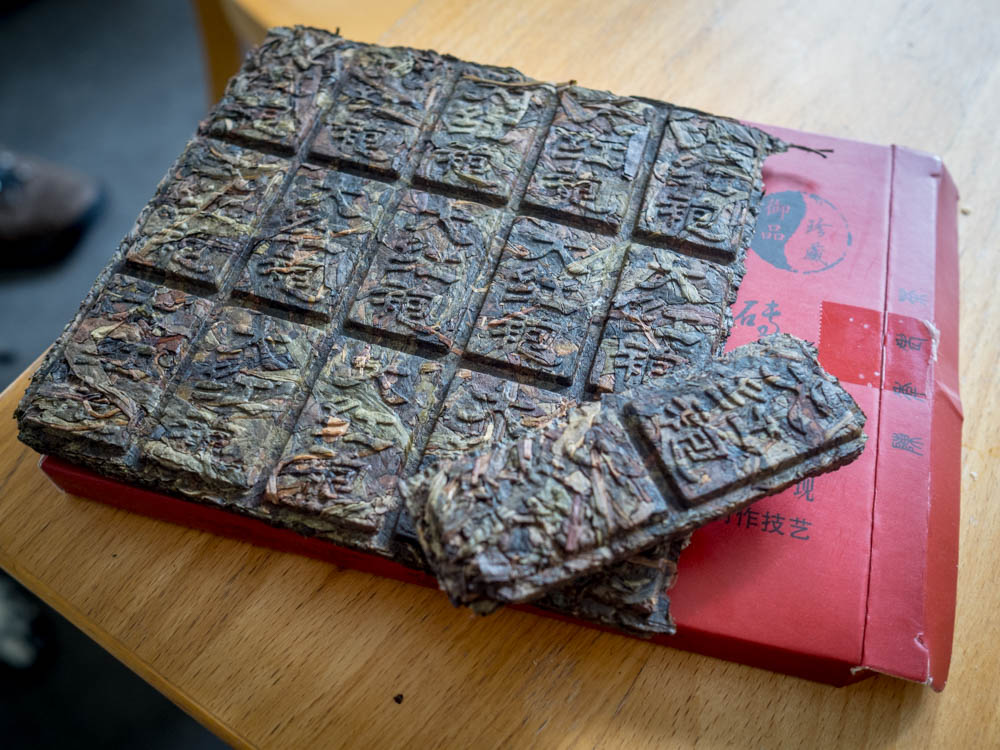 The tea itself is a superior grade oolong. However, during the production of the oolong leaves, some of them break - it happens all of the time - and were sorted to the side, with the unbroken leaves winding up in loose leaf tea. Rather than simply sell the broken leaves as a lower grade and leaving them loose, the manufacturer pressed them into a cake, similar to how one might with pu’er.

It’s not that uncommon to see oolong pressed into a cake like this, I gather. The idea of cakes of tea like this makes perfect sense when one thinks about what was involved in packing and shipping tea from, say, China to Tibet. It was easier to reduce the volume so that more could be packed on the backs of pack animals at one time. 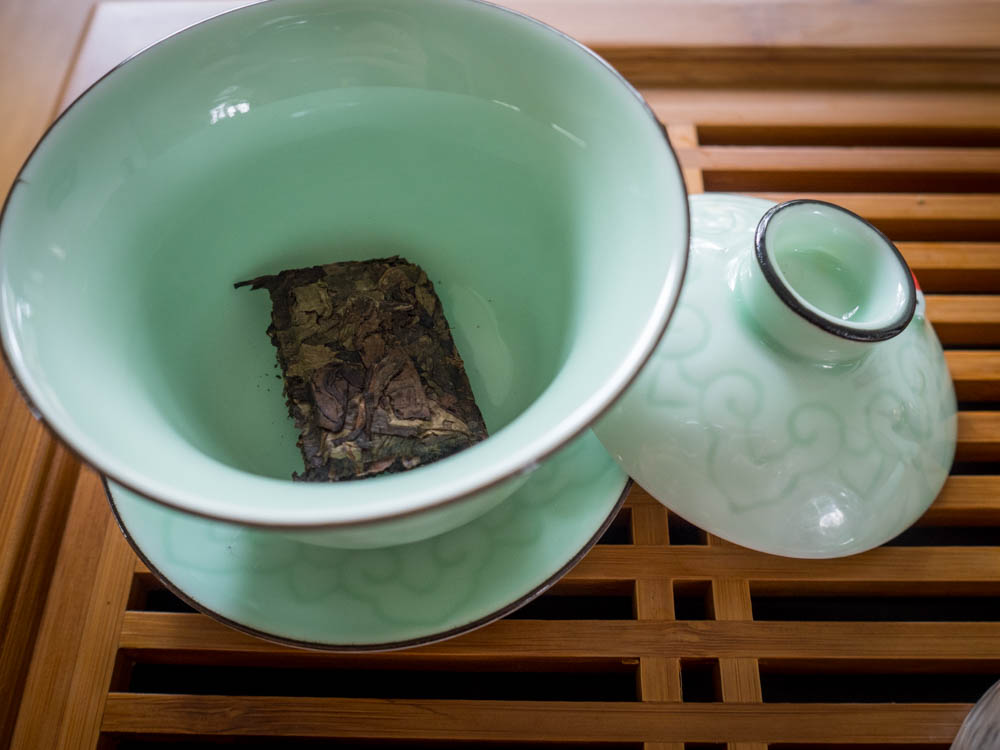 The pieces separate from the brick fairly easy, with a crumbly sort of snap. Despite my best efforts, the entire row snapped off when trying to break along that line. Not unexpected, I’m just a little twitchy about those sorts of things. In the end, it was fine, as it all fit back into the box without trouble, no bulging or anything that is often a problem with stuffing loose tea back in a bag.

This is likely due to how tightly these leaves are pressed, which is pretty tightly indeed. There was hardly any flaking at all, and I couldn’t do much more than get a few flakes off with my fingertips. Even so, on adding water, the tea blossomed right up without hesitation, filling the gaiwan by the second brewing or so.

The individual pieces weigh about 8.5 grams, which was just perfect for my 120ml gaiwan. I rinsed once for 15 seconds at around 190°F - I’ve been shy about temperature since the last review, and I probably could’ve pushed it up a little more. No regrets, though: the lid of the gaiwan smells roasty and vegetal without smelling cooked, more of autumn leaves and fresh zucchini. 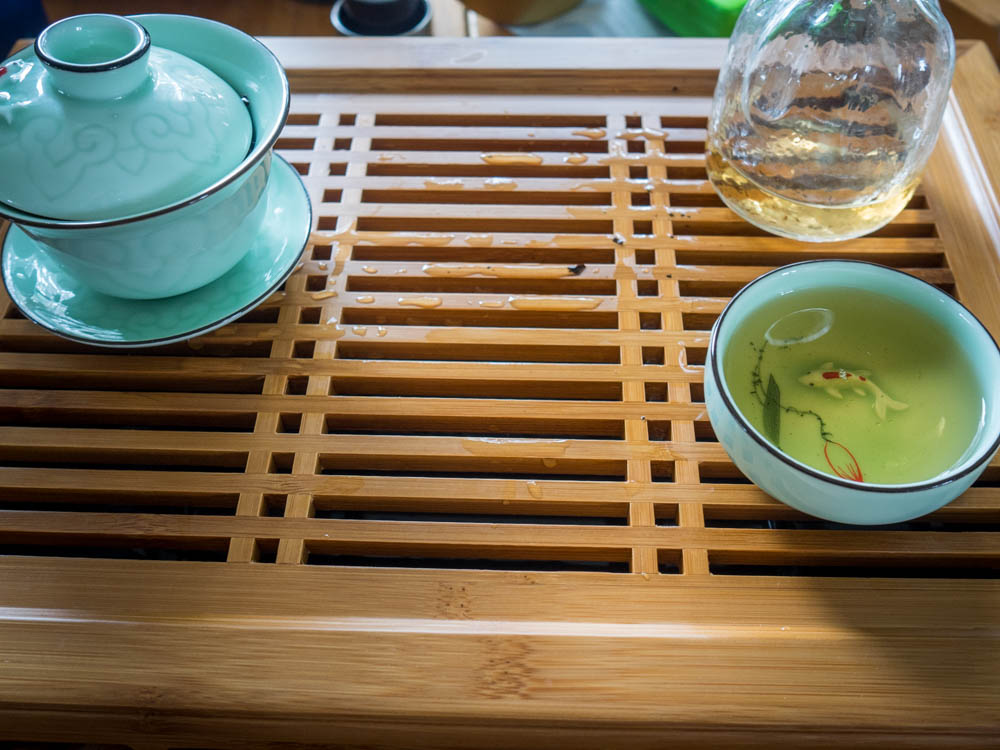 I started at 10 seconds, then went up ten seconds each steeping, giving a light greenish-brown liquor at the start.

Wow. The smell off the lid of the gaiwan didn’t prepare me for this. Hell, neither did the smell from the cup. I mostly got vegetal and roastiness with a hint of an unplaceable freshness that I later decided was a pleasant fresh kale note.

The taste, however, was incredible. Roasty, sweet caramel corn, some fresh-raked autumn leaves. I was reminded immediately of those cinnamon and sugar roasted almonds that one can get at fairs around here, though primarily the caramel-coated skins, rather than the nuts themselves. No bitterness at all.

The second amber-colored steep was delicious, but rather underwhelming, given the first, making me think that I should’ve tried the rinse. This time, the caramel and roastiness really started to come through in the nose, along with the leaves, and a slight hint of dried herbs, perhaps savory or oregano. The taste was a little harder to pin down. It was still sweet, with some dry grass and leaves, roastiness with just a tiny touch of sourness, which wasn’t unpleasant, but didn’t really add to the tea. Some of those herbal notes came through. 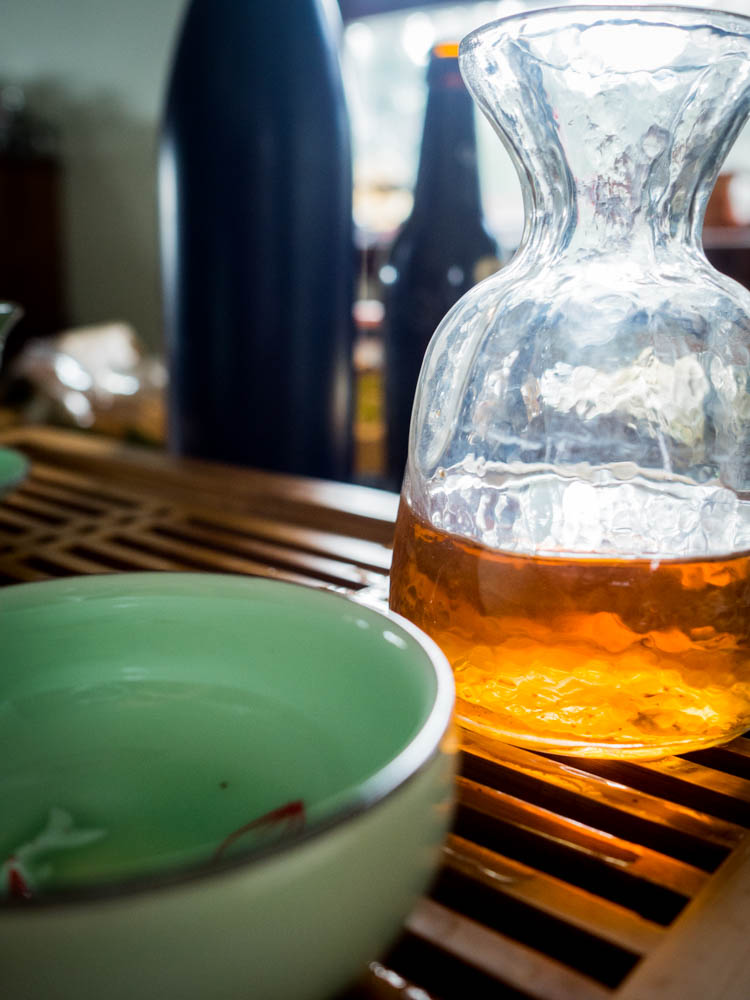 It seems that I made my way through the tea’s flashy start, and settled into a solid, mid-roast oolong. The liquor darkened over the next few steeps to a light brown color, which was quite beautiful.

The third steep was notable for having a caramel corn, rice pudding, and oatmeal smell hovering beneath that (still pleasant) kale vegetal note. Beyond that, however, I started to get more notes of simpler odors, such as bitter greens like kale, autumn leaves and some roastiness, and what I can only really describe as an oolong note: like someone had toasted some fine green tea for a few minutes in the oven.

The flavor was solid and pleasant through all three steeps. There was a little hint of that roast, but more so just a pleasant, slightly earthy tea flavor - very oolong in character - with notes of kale and fresh zucchini. A tiny bit of pleasant bitterness showed up on the fore, but faded quickly into huigan sweetness.

By the fifth steep, I started to get a bit of sweating that I’m starting to associate with digging into a tea like this. Despite the sweating, I noticed a cooling sensation at the tip of my tongue and on my lips, which was quite pleasant. There was a touch of astringency, not really in the flavor, but more the texture: despite the medium body of the tea, I noticed a slight parching effect in my throat, without it really showing up in my mouth. One note that I made was that this would make a fantastic iced tea, and this added to that sensation. I could see it quenching thirst delightfully in the summer.

The sixth steep at a minute long started to show the tea fading. I brew from a fantastic thermos that doesn’t lose much heat at all over the course of a session. However, due to leaving the cap off for the first two steeps, it’s possible that it cooled down a bit, and thus led to a shorter session. No complaints, though, the tea is still quite pleasant. No cooked flavors, despite still having that fresh kale note to it. The astringency was more notable here than on the previous steep.

Despite a two minute (rather than 70 second) steep, my note from number 7 says “nothing left but ghosts”. This went for both the smell and the taste of the tea. There was a vague hint of that oolong brown in the flavor, but the nose was just hints of kale and herbs. Even the cooling sensations on my lips and tongue faded away. The tea was wonderful to the end, so I’m not concerned about not getting more steeps out of it, though in the future, I’m sure hotter water toward the end would’ve done it. 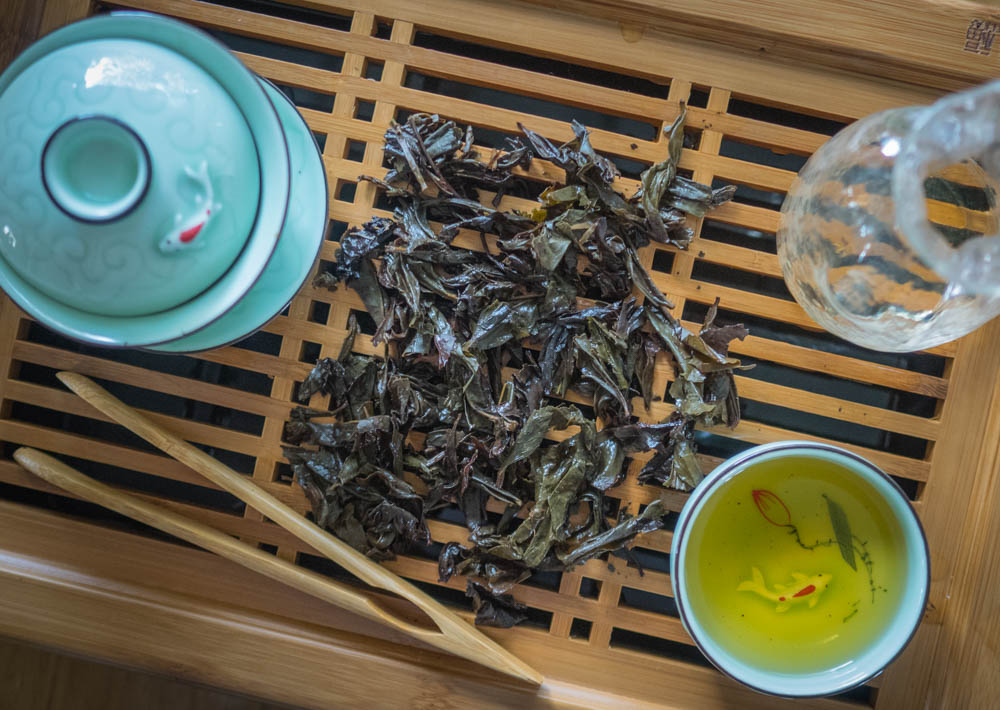 On the final inspection, I had been expecting much more leaf fragments than I actually found. What I got was definitely a medium-roast oolong with mostly whole leaves, leaving behind more herbal scent than came off the liquor. I think that confirms that more steeps would’ve been possible if I had bumped the temperature of the water back up.

I’m super pleased with this tea. I’ll definitely be taking it with me on my travels both for its ease of use and for its delightful array of flavors. Of course, that will take a little more testing to bear out - will it work well if I just drop a piece in a thermos and fill with hot water, or should I invest in a filter so I can drink by the cup? I’ll do some more experiments and see where this goes!