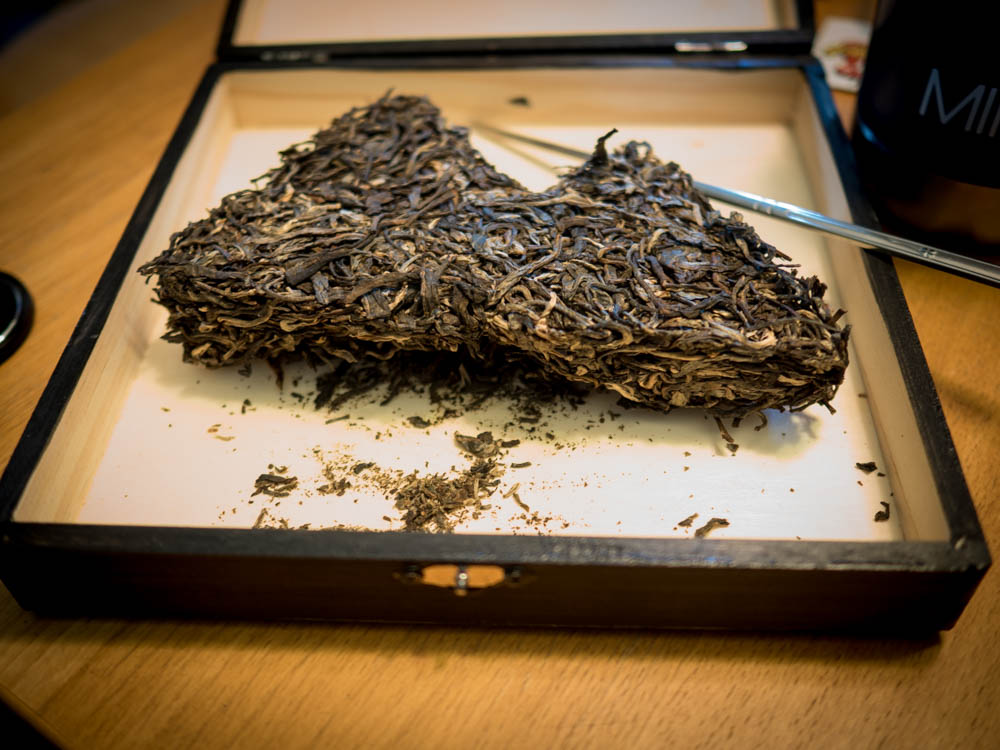 I’ve been getting into tea lately.

I move through interests with some frequency and pick them up with quite a bit of intensity, so it was no surprise when I latched onto pu’er itself as something to explore. Tea, like many things, has fractal depth: the more you look into it, the more you find. You can keep digging and digging until you get way down deep and there will always be more for you to find out. This is part of why it’s so interesting to me.

I had been reading a lot about pu’er over the last few weeks, and finally settled on a few cakes that sounded appealing and would be a good introduction to that side of the tea world. Prior to this, I focused primarily on Earl Grey teas and their variants (the more bergamot, the better), and super flowery Tieguanyin style oolongs. The rich earthiness and subtle flavors of pu’er are new to me.

The first two cakes I wound up with are from Misty Peak Teas after a stunning YouTube review of one of their previous teas. I came away with their Spring Mountain 2015 sheng and their autumn 2015 sheng.

I was a little dubious about these teas and pu’er in general when they first arrived. They initially smelled dusty and earthy without much depth, much like my first experience with pu’er, some of those mini tuocha that you can get for a few cents each. However, after a few days of resting at home, they really opened up. The Spring Mountain, which I tasted today, opened into a wonderful bouquet of apricot and a touch of camphor.

The cake itself is shaped into two peaks. I felt kind of bad breaking it up for today’s tasting, but that’s something I’ll likely deal with when it comes to starting out with any cake; breaking that shape for the first time is difficult. 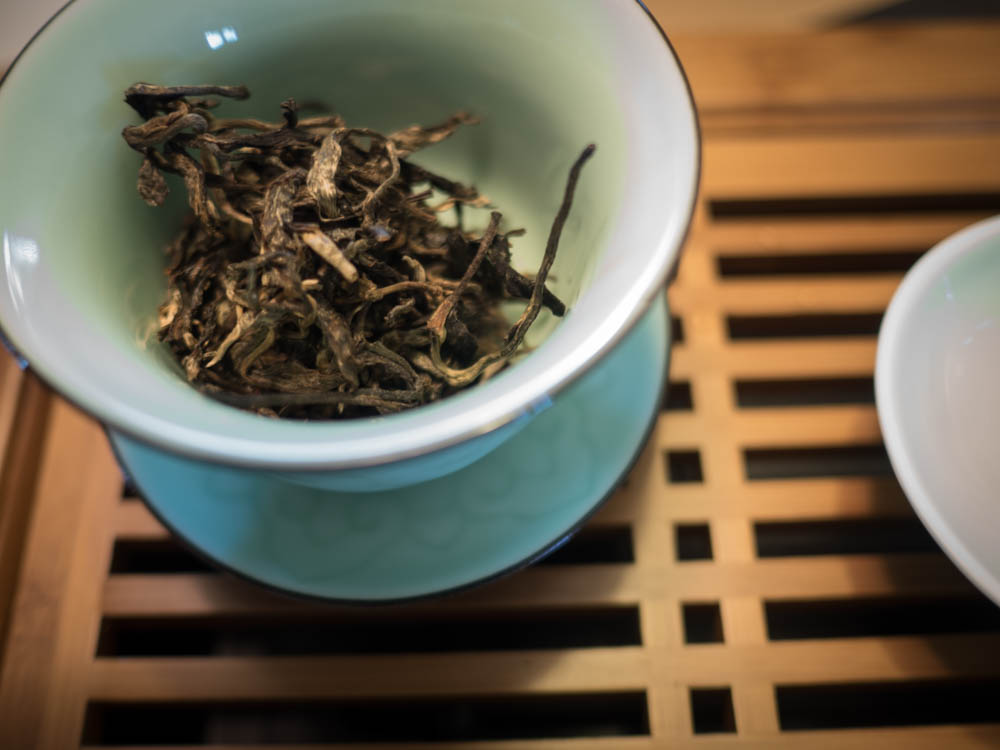 I went with 8 grams of tea in a 120ml gaiwan and water starting at 195°F. This was much too hot, I found, and I think that contributed to both the relatively few steepings I got out of the tea, as well as some of the early astringency, which calmed down when using cooler water. Misty Peaks recommends 165°F to 185°F, with good reason I think.

I rinsed the tea twice for about 15 seconds each time. The scent off the lid of the gaiwan was a lot of dried apricot, plum, some camphor, and the distinct scent of raking leaves in autumn. Very pleasant, a total opposite from those bland, muddy tuochas I had before.

I started steeping at 10 seconds, and went up five seconds for each steep. 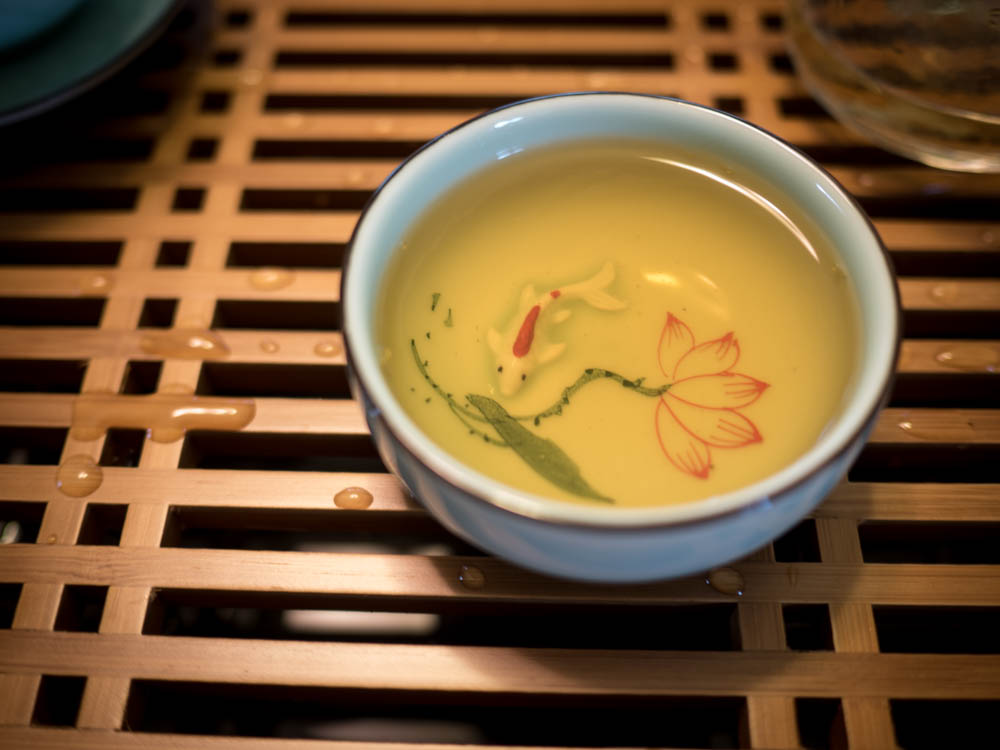 Early on, there was a lot of the camphor and not much of the stone fruits. This is likely from the over-hot water. The soup was golden, fragrant, and bracingly bitter at first. As it cooled, I was able to detect faint notes of plum or something hiding beneathing the bitter. The smell of raked leaves was definitely evident in the first few cups.

Despite the bitterness, and the bit of astringency poking through in the second steep, there was a notable sweetness that lingered after drinking. This huigan was quite pleasant, and kept my mouth from drying out too much.

As the water cooled down, the tea sweetened up quite a bit. The astringency faded away to more of a mineral flavor, and the smells shifted from camphor to dried apricot.

I started to pick up notes of pear skin and plum pit, with the bracing bitterness calming down in steep 4 to a slight vegetal note that added some creaminess to the tea. The body was just about right, though, not overly thick, and not overly thin.

Things mellowed out quite a bit in the 5th steep. There was a lot more vegetal and green tea odors, perhaps a bit of a cooked note from my early temperature gaffe. The flavors really started to ramp up into stone fruit, though. Apricots and plums, with tons of sweetness, a hint of that vegetal note coming through towards the end.

These were my absolute favorite steeps of the whole bunch, and not least of which because I was starting to get what I suppose is quite tea-drunk (I’m going mostly by descriptions of others, here; kind of euphoric, a little silly, a little careless).

The scents and flavors were all about the stone fruit, and super sweet with no remaining bitterness or astringency. Perhaps a little gross, but at one point, I burped, and the taste that came with it was so intensely sweet that I just sat and reveled in that for a bit. It was like biting into a just-under-ripe plum. By this point, my water had cooled down quite a bit and so that’s what makes me think that I started too hot.

By these later steeps, the tea had started to poop out. It was picking up more of a vegetal note, but everything became very faint. It didn’t go out with a bang, it just kind of fell asleep. Even so, it was quite good. I can still taste the sweetness now, an hour later.

My picture didn’t turn out, but I did inspect the leaves after brewing. They were a little broken up with some stems, but otherwise fairly whole. This might be an artifact of my tea pick being a chopstick until I get something better, though. They were primarily a sort of olive drab color, with the occasional brown or green tinge

In all, I’m intensely happy that I’ve gotten the chance to actually sit down and try a wonderful sheng. I think I’m going to like it here in tea world, in pu’er land.