It’s no secret that I love White 2. Their teas are fantastic, their marketing is fantastic, and their owner runs a rockin’ blog. The more I got into pu’er, the more I found myself gravitation towards White 2’s offerings.

So, of course, I had to jump on Brown Sugar.

The wrapper just absolutely tickles me. The idea of a (relatively) lightly fermented huangpian shu sounded fantastic. The thought of grabbing one brick to age and one brick to drink appealed to me. And hey, I was already ordering a boatload of other teas. Two bricks it was.

Did I say “shit, damn, motherfucker?”

This was a really delightful tea, from start to finish. I had a bit of trouble getting the wrapper open without tearing it (I like it so much that I want to keep it as intact as possible), but once I did, I was greeted with a wonderful smell and a nice, tightly compressed brick.

The description said that I might see some green in the leaves due to the light fermentation, but there wasn’t much evidence of that on the surface of the brick. I chipped off 8g for my 120ml gaiwan, and set the water to just off boil, at about 200°F. After a ten second rinse, the lid of the gaiwan gave me a lot of sweetness and earthiness, like baked goods, with just a hint of bitter tea. 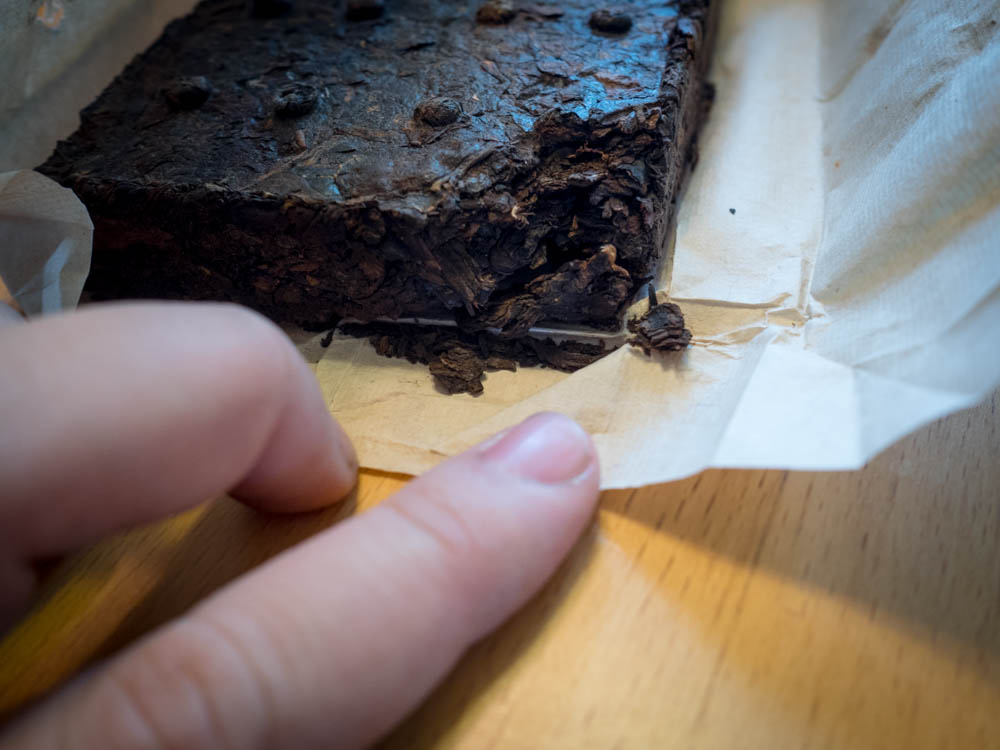 The early steeps, starting at ten seconds and increasing by five seconds each time, were fantastic. There were lots of notes of cookies in the nose, with a hint of something astringent, like a spice cookie. The taste leads with earth, then goes to sweet, and finally to cooling. The body is full and, as mentioned by the label, incredibly smooth.

By the second steep, a bit of bitter starts to peek through in the flavor, but it’s very pleasant. There are no jagged edges to this mahogany tea, nothing sharp, and it sits warm and full in the mouth.

As the session went on, the tea became more and more complex. There were slight notes of cinnamon or some other spice, perhaps nutmeg? The flavor started out super smooth and sweet. The tea isn’t bright in flavor at all, but neither is it as dark as the laochatou.

By the fourth steep, I was getting some hints of apricot jam or preserves, with a bit of dried apricots on the lead in the mouth. The tea is still quite cooling, and although it didn’t taste very astringent, it did leave the insides of my cheeks a touch dry.

I messed up the fifth steep, I think. The nose was far too light, and the taste even lighter. Although it was light on flavor, the mouthfeel was still quite full, and there were a few notes of malted grain toward the end. Perhaps I’d just messed up the timing.

With that in mind, I pushed the sixth steep to one minute, and the tea was much better. In fact, I’m thinking that I should’ve pushed the tea much sooner than this. The nose was complex, with lots of dried fruits and molasses cookies, rather like a dense fruitcake. The taste was earthy and a touch spicy (nutmeg again?), and very sweet, fading to a slight herbal note and lots of brown sugar. The seventh steep was clearly the last I’d get out of this session - the tea had faded to a simple earthy sweetness, but had lost all its steam.

All in all, this was a fantastic tea, and I’m glad I got two bricks of it! I may have to pick up more, because shit, damn, motherfucker, that tea is smooth.