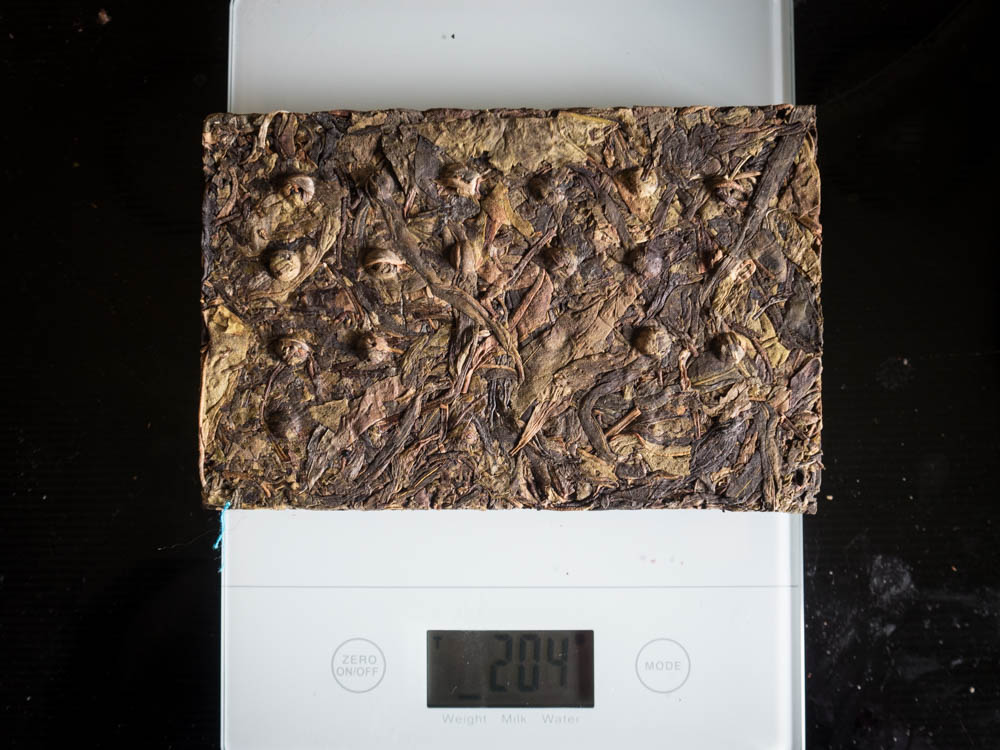 I finally got more tea in! I got…a lot. It’s going to take a while for me to work my way through the backlog of tasting. I have some notes from two aged white teas from Bana, as well, that need to be written up. I’m still drinking plenty of tea, but writing has fallen by the wayside as work goes nuts.

There’s a lot that goes into marketing tea. There’s a few common trains of thought that producers and resellers seem to follow. One common one is that tea is the utmost in zen-like tranquility. The boxes or bags are covered in soft pastels, the logos are dreamlike, and even the punchy teas are claimed to be meditative.

Of course, some teas are just all business. Many of the pu’er bings that one sees coming out of china are like this. A natural-colored or white rice-paper wrapper with blocky, usually red Chinese characters front and center. Occasionally, one will see characters, usually green, ringing the outside of the bing. The big producers such as Taetea are comfortable with marketing based on simplicity. This is tea, the wrappers say, and they’re not wrong.

And then there’s White 2. 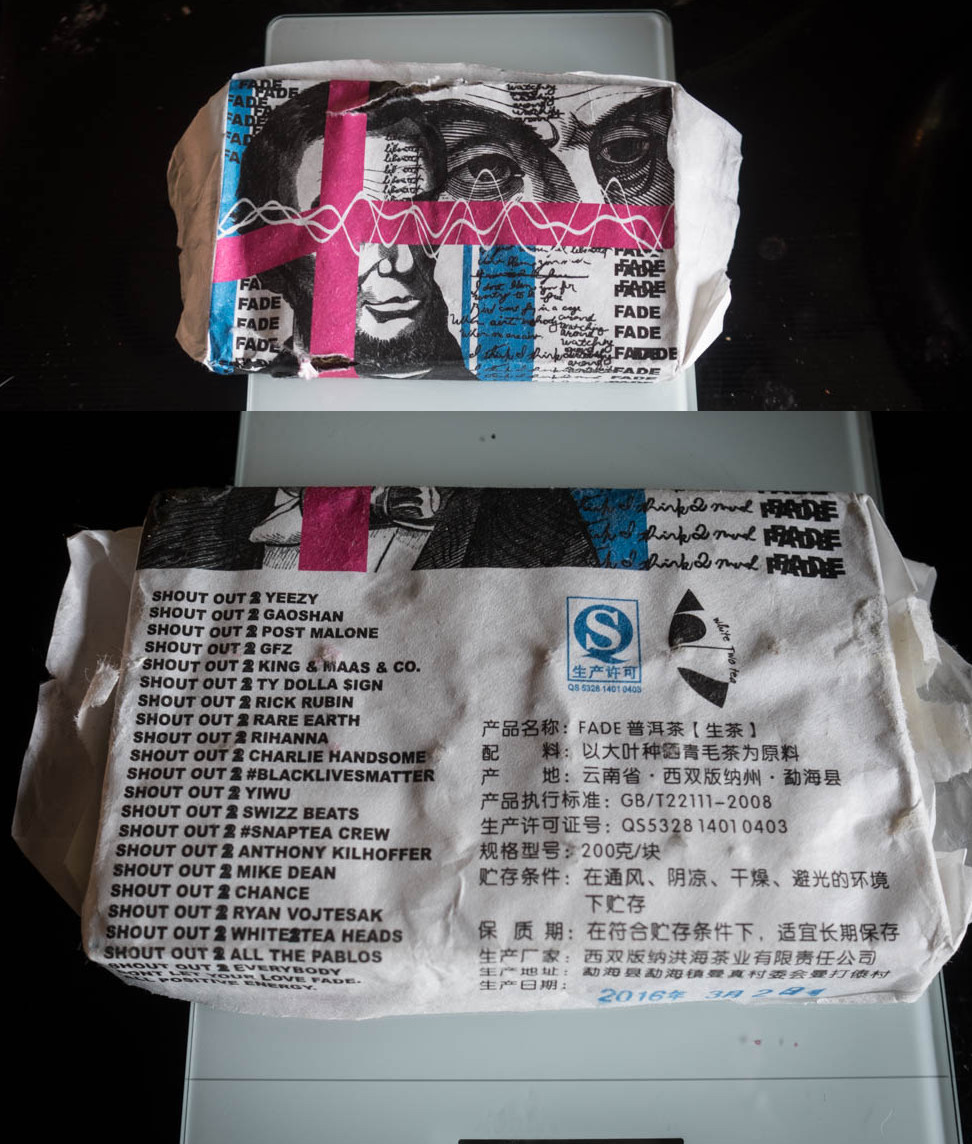 They’re my kind of tea company, I would gladly buy just their labels to hang in my house. Lucky for me, their tea is just as delightful and they have a monthly tea subscription service.

For the April box, I got their 2016 Fade sheng, a young huangpian raw pu’er pressed this spring. Fade was inspired by Kanye West’s Life of Pablo, both the music itself and the design of the cover of the album. This is reflected on the tea with the overlapping text on the front of the label and the “track listing” on the back. I’m definitely a fan. 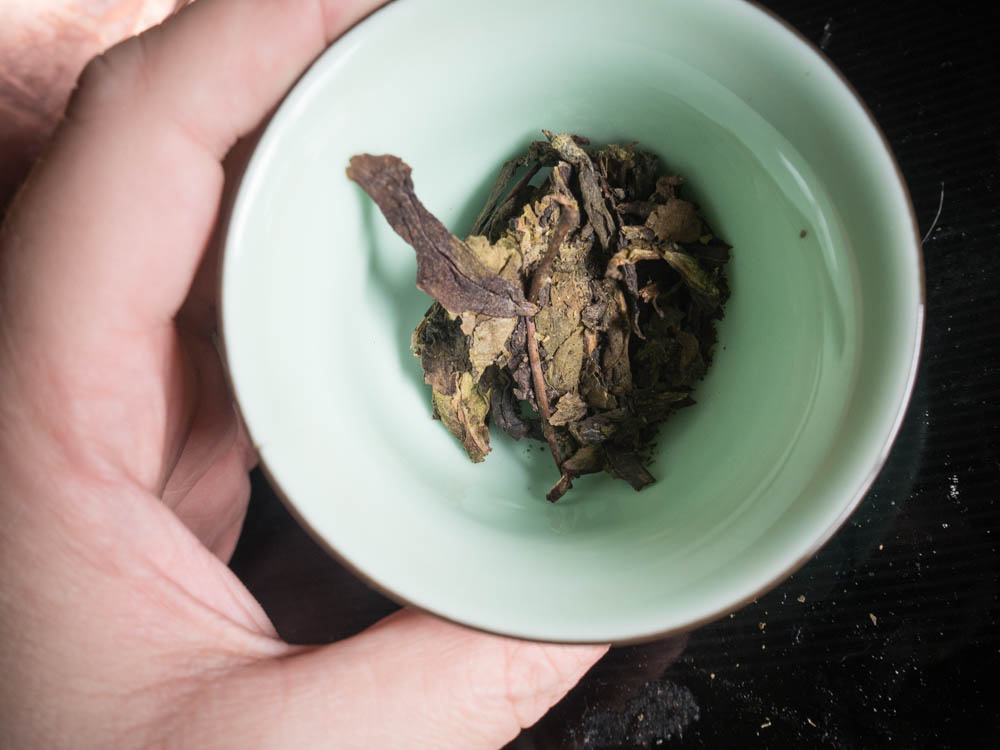 I split off 7 grams of tea from the brick, which was fairly tightly packed. It fit nicely in my 120ml gaiwan. I started with 200°F water, which is just shy of boiling here in Colorado.

The tea doesn’t smell like much, dry. After a ten second rinse, I got smelled the lid of the gaiwan and got a better idea of what the tea was all about. There was lots and lots of hay, a bit of grass, and the promised sour note, which was a little vinegary at first, then fading into more citrusy. The rinse itself didn’t taste like a whole lot, and only carried a faint scent of hay.

This tea brews up light. To get a better shot of just how light, I got one of my too-small white cups and poured some in there (and then promptly poured it into my regular cup – what is this, a cup for ants?).

I started steeping at ten seconds, increasing by ten seconds with each steeping. Early on, the smell of hay was the most prominent. The taste started out very light, with lots of hay, honey, and the lingering sour note, which was quite pleasant. It wasn’t puckering, offputting, or flat, just nice and fresh.

The body started out thick, but not overly so, and continued through the steeps. As time went on, the acetic note of the sourness shifted more towards lemon juice. By the third steeping, the tea began to pick up notes of astringency and bitter/huigan flavors as the sour began to fade, which was very nice on a warm spring day. 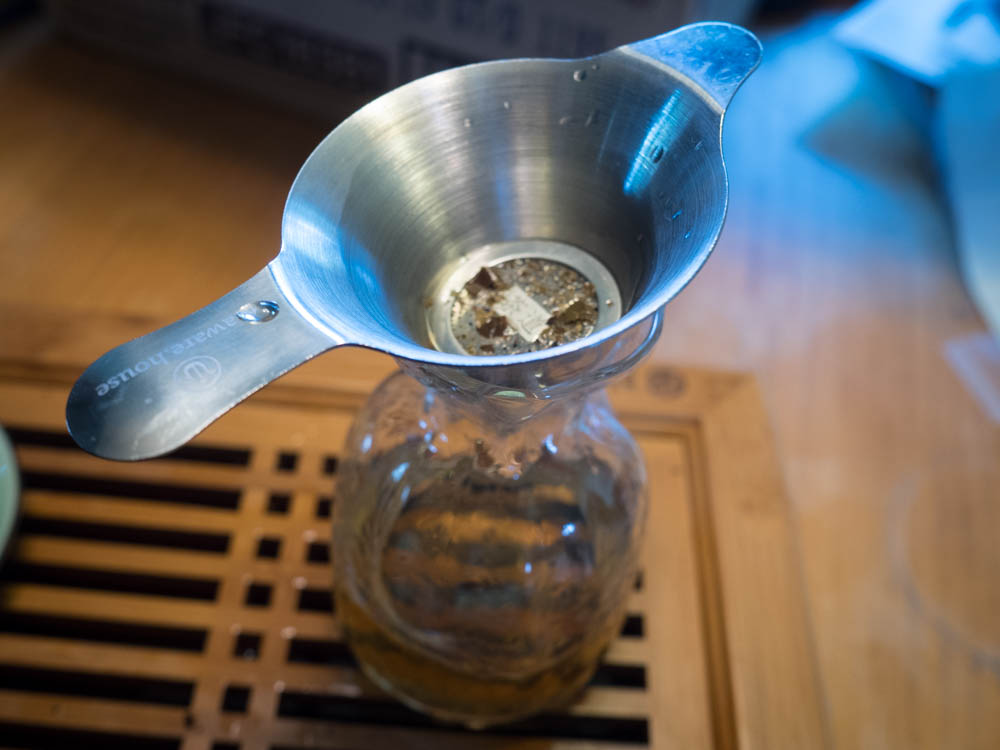 The tea really started to come into its own as time went on. The hay notes calmed down and the tea picked up some slight herbal notes, along with more bitterness and astringency. The sourness remained, but was almost hidden under the fresh complexity.

Starting at the fifth steep, things settled into a routine. The tea began to remind me pretty strongly of an Arnold Palmer as the citrusy notes picked up and the tea moved away from hay. There were more notes of green tea in the taste, and the flavor, while still light, kept that hint of Arnold Palmer. 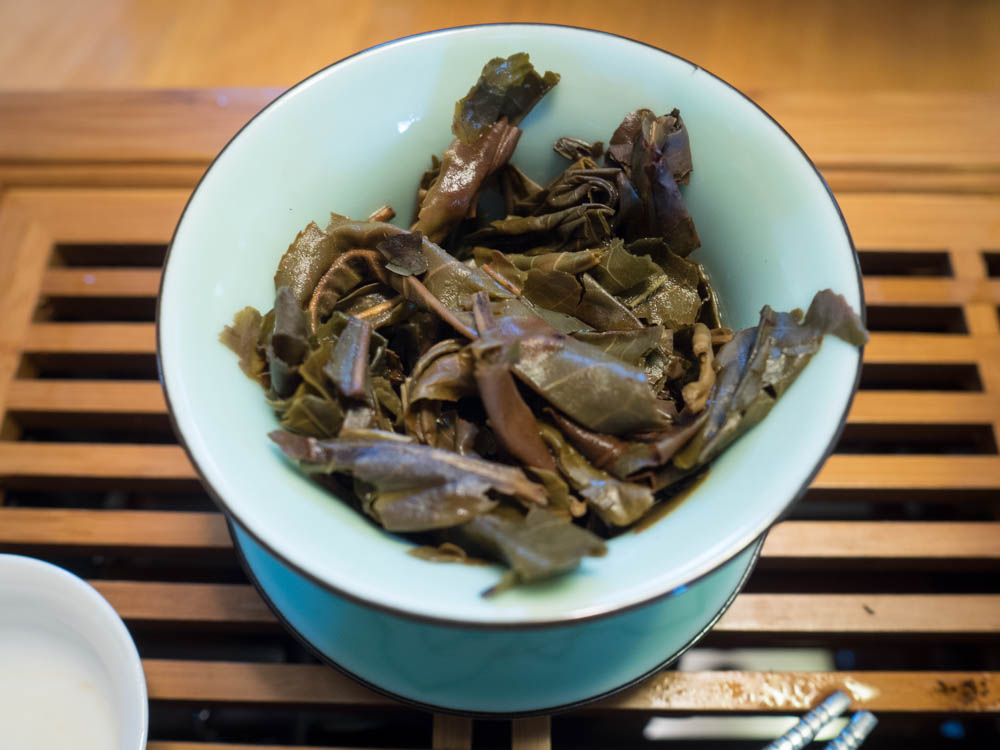 I steeped the last two rounds for one minute and two minutes respectively. Fade could likely have gone on for a few more steeps at ten second intervals, but I was running out of water and work was getting in the way. Even so, the tea held up to the longer steeping times. There was a very faint vegetal note that could’ve been developed further, but with the longer times, the astringency and herbalness came to the fore.

I wrote in my notes that this tea was super drinkable, and I stand by that. The astringency and bitterness stayed in that pleasant area, not getting too overwhelming, and the sour citrus notes were fantastic for spring. I’m really curious to see what this tea does over time, since it’s still young, but obviously quite good! 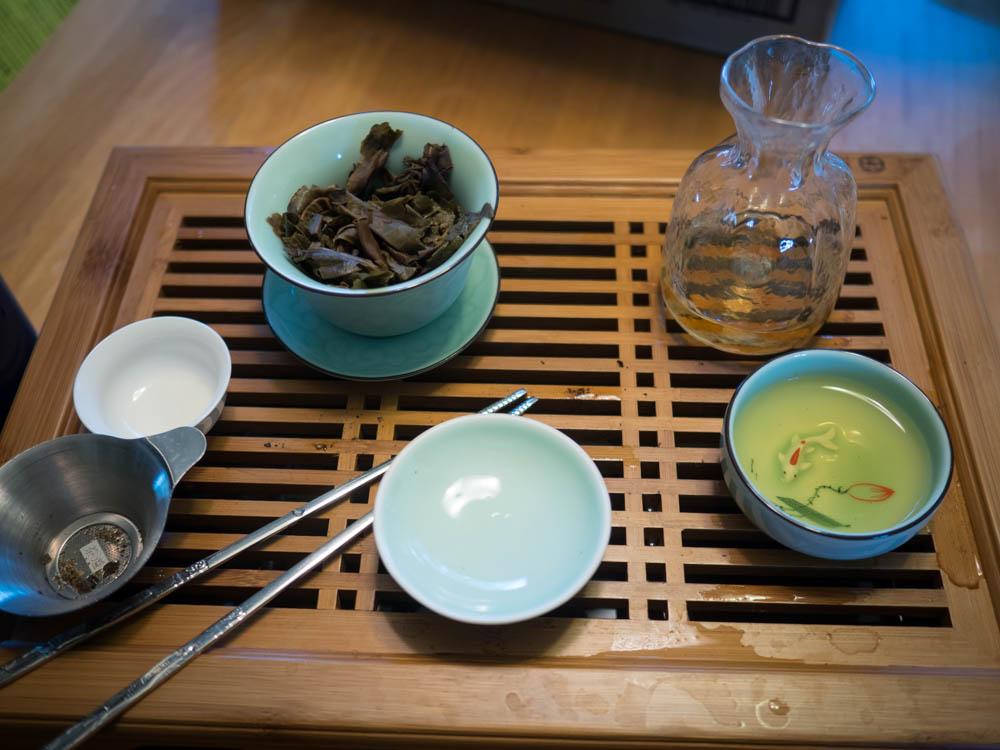