One of the other White 2 new arrivals that I’ve been eagerly looking forward to!

The process of making shu – ripe pu’er – is a relatively recent adaptation. Some of the great pu’er teas are those which have had years and years to age, the ‘fermentation’ process calming down the tannic aspects and resulting in a rich brew. Aging isn’t exactly profitable, though, so tea factories found new ways to get similar flavors from younger teas, and to do so in ways that took only a few months rather than two decades.

This is done by keeping the leaves, after their initial preparation, in a temperature- and humidity-controlled environment and turning them frequently to encourage the oxidation and microbial processes that lead to the fermented pu’er taste. If that sounds rather like composting, you’re not far off: shu pu’er is often accused of being swampy, fishy, and savory as a result of this process.

During the times when they turn the pile of damp leaves, those which are at the bottom of the pile have already started to compress, usually into little balls or nuggets that roll off the top of the pile once it’s turned. These little nuggets of ripe puer, already compressed by the weight of the pile, have a unique character all of their own, milder for being compressed so early, but still full of that rich, black brew that one gets from shu.

Not everyone is a fan, and some have called them a marketing triumph with no inherent value.

However, White 2 offers these laochatou in 50g increments for the startling price of $5.50. The reviews for the tea were intriguing enough that I just had to try them out, and I’m very, very glad that I did. 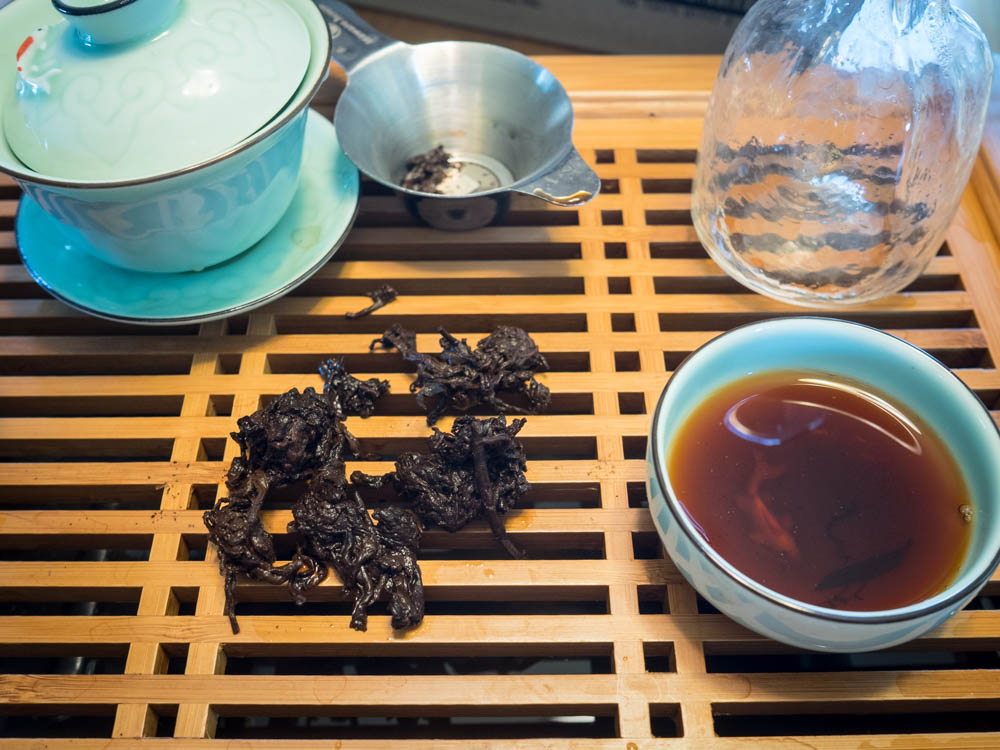 Following the advice of others, I gave the tea two thirty-second rinses, shaking the gaiwain with the lid on between them to help loosen up the firmly compacted nuggets of tea. The lid of the gaiwan smelled rather savory, with lots of dark earth an dhints of chocolate baked good, almost like dark chocolate brownies.

I was a little dubious at the nose of the first steep (twenty seconds), as I was getting something rather like beef broth with a chocolate digestive biscuit dunked in it. As time went by, this loosened to chocolate cake. The taste of the dark brown liquor was something else, though; a little dusty and dirty to start, but then jumping straight into sweet chocolate and molasses, with a touch of savory fresh-baked bread on the tail. The tea was thick without being coating.

Through the next two steeps, increasing in time by ten seconds, the savory notes started to drop out and I found myself confronted by a lot of sweet earth in the nose. The flavors continued through chocolate baked good, or chocolate cookie dough. You know how, especially with cookie dough, you can taste the tiny bit of salt that makes the cookies feel complete, like they’d be lacking without it? That was the extent of the savoriness remaining. It was delicious, paws down, and even the faint note of clean compost on the fore of the second steep was pleasant.

Through the later steeps, I started to lose the intense cocoa notes that I was getting in the first steeps, but not the baked-good notes. It was closer to oatmeal cookies or even snickerdoodles than brownies, with a slight hint of dustiness and dampness.

The flavors started to pick up a cooling note rather like menthol, though without the mintiness that that implies. There was a pleasant, full sweetness that lasted quite a while after sipping. By the end of steep 6, my water had cooled down (I’d forgotten to put the lid back on my flask of hot water) and I was getting mostly earthy sweet notes with a hint of black tea fullness.

According to White 2, “[w]hen you are done steeping them, you can also boil them for ten minutes or so” to come up with a strong and sweet tea. I didn’t want to boil this in my pots, as I’ve had bad luck with them in the past (I thought they were steel, but maybe not), so instead I put the nuggets, still intact, into my thermos (a good vacuum-walled one) and poured two cups of boiling water over them to let them steep for ten minutes.

I messed up the first pour by using my loose-leaf cup strainer to strain out the tea. Apparently, I hadn’t washed it that well before, as I wound up with a rather disgusting blend of lavender and shu. That left me with enough for a small gongfu cup’s worth of tea, which I tried. Ah well, live and learn (and wash more thoroughly).

The resulting brew was delightful. There was a rich earthiness and slight mineral note that lead in the nose, which trailed off to a definite note of molasses-sweetened oatmeal cookies. The taste was, indeed, syrupy and sweet, with a pleasant bitterness that filled the mouth before trailing off into oatmeal cookies.

This was a fantastic tea all around, and wonderful end to a session. Definitely keeping this in stock as I’m able.